The land area of the diocese is 50,610 square kilometers. It forms the northern part of Peninsular (West) Malaysia bordering on Thailand. The diocese covers five Northern states which are Penang, Kedah, Perlis, Perak and Kelantan.

Bahasa Malaysia (Malay) is the predominant language, but various dialects of Chinese, and Tamil and English are widely used. (Jenkins,1981)

Penang Diocese experienced Catholicism early in 1766 when Bishop Le Bon and his confreres had to leave Siam for Pondicherry (India). In 1781, traders from Siam told these missionaries there were Christian refugees in Port Quedah (part of Siam at that time, though now in Malaysia.)

On such an event, two priests Fathers Garnault and Caude found a community of about 80 Catholics, comprising mainly of Portuguese Eurasians. They were well received by the Sultan and allowed to build a church.

In 1788 this settlement was abandoned when Captain Francis Light established an English settlement in Penang and invited Father Garnault and his Catholic community to go to Penang. Catholics in Malaysia came under the jurisdiction of the Vicar Apostolic of Siam until 1841. The territory later became an independent mission station with Msgr. Courvezy as its first Vicar Apostolic. He was in charge of 500 Catholics in Singapore, 2,000 in Penang and 2,000 in Malacca, forming the ecclesiastical district which was called "West Siam."

Pope Leo XIII in 1888 changed the status of the vicariate, and it became known as the Diocese of Melaka, with the bishop resident in Singapore. This arrangement continued until 1955 when Bishop Francis Chan was appointed Bishop of Penang and he had jurisdiction over the states of Penang and Province Wellesley, Perak, Kedah, Perlis and Kelantan. (Jenkins, 1981)

Malaysia is a Federation of States, with a legislative assembly proper to each state. In the 1978 elections all of them came under the control of the National Front, an alliance of parties (UMNO, MCA, MIC, Gerakan) that also controls the Federal government.

The main railway link runs north to south, connecting Singapore at one end of the Peninsula with Thailand at the other. The North-South Highway connects Kayu Hitam in the north and Johor Baru in the south. We also have the East-West Highway connecting the east and the west.

Penang, Ipoh, Alor Setar and Kota Baru are linked by air services. The airport in Penang has been upgraded to international status. Express buses and taxis offer frequent and rapid connections between all major cities and towns. Car ownership in urban areas is relatively high by Asian standards.

Equatorial (hot and wet throughout the year).

In general, Malaysia has a strong and prosperous economy. This is true of the territories included in the Diocese, especially the urban areas of Penang and Ipoh. Leading products are rubber, tin and palm oil. Malaysia's rice is mainly produced in this northern part of the country. (Jenkins, 1981)

However the economic scene has shifted very much since the 1980's with great emphasis now being carried out in the factories linked with ICT technology.

Telecommunications are well developed in the diocese. Various telecommunication companies now offer fixed and cellular telephony services. Telekom Malaysia Berhad is the main operator of telecommunication services. On the international scene, TM connects the diocese to the rest of the world via submarine cable systems and satellite. We enjoy International Direct Dial (IDD) facility. Dial 1515 is one of the services offered by TMnet which allows users to connect to the Internet over normal telephone lines using modems. Cellular telephony services started with CELCOM Sdn. Bhd. in January 1988 and was then followed by DIGI, Telekom and Maxis telecommunication companies. (Malaysia Year Book, 2000).

Some 28.55 percent of the population in the diocese attend school. In the diocesan area there are 203 kindergartens; 1,889 primary schools (six years); 460 secondary schools (five years, plus another two for pre-university); and two universities, one poly-technical college, two teachers training colleges, and several private colleges. (Jenkins, 1981)

Some private colleges cater for courses leading to foreign professional and other diplomas and degrees. The most recent development has been the introduction of twinning programmes.

Malaysia is a complex nation culturally. No specific 'Malaysian' identity or culture has yet emerged. The National culture is rather along four parallel streams which involve Malay, Chinese, Indian and Western civilizations and cultures. This can present problems for the local Church. A suitable local liturgy has not quite evolved as it is possible communication problems can arise though most speak Malay, English or both. (Jenkins, 1981).

Some parishes have adopted the use of three or four languages during the celebration of Masses. How to reach Penang Diocese? 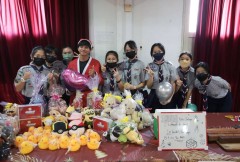