Masan diocese belongs to the ecclesiastical province of Daegu which comprises Daegu archdiocese and the dioceses of Andong, Cheongju and Pusan. Masan diocese was carved out of Busan diocese as a suffragan diocese of Daegu Metropolitan on Feb. 15, 1966. In 2006, the diocese celebrated its 40th anniversary.

In a pastoral letter in 2007, Bishop Francis Xavier Ahn asked the faithful to proclaim the Good News and witness it in the world. It also stressed the practice of reading the Bible and loving and protecting life among other issues.

Masan diocese has several martyrs' graves and has a special fraternal relationship with Austria's Graz-Seckau diocese.

The population within Masan diocesan territory was 2,560,439 as of 2016, accounted for 4.87 percent of the country's population of 51 million. Most residents are ethnic Koreans.

Standard Korean is in use. English, a mandatory subject in schools, is understood in business and tourist areas. All traffic signs are in English and Korean.

Masan diocese falls within the temperate zone and has the four distinctive seasons of spring, summer, autumn and winter. The yearly average temperature of here is 13-15 degrees Celsius. The annual precipitation in the region averages 1,200-1,700 millimeters. The warm currents of the southern sea make Masan a warm and rainy area. Most of the rainfall is concentrated in the rainy months (monsoon period) of June through September.

Masan diocese consists of several small cities and counties. It is located at the southern tip of the Korean peninsula and borders the dioceses of Daegu, Kwangju, and Pusan and Jeonju. The region has an altitude of 100-500 meters and consists of mountains in the west, fields and a river in the central part, and a coastal area in the south with many islands and ports. Manufacturing has been the main industry since 1970 when Masan was designated a Free Export Zone. Changwon city has a huge industrial complex and Tongyeong is a tourist area with historic sites and scenic islets.

How to reach Masan Diocese? 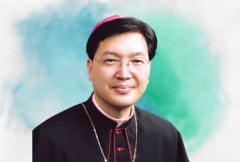