In the territory of Kyoto diocese, the population is 7,236,492 at end of 2016. Most residents are ethnic Japanese. There are also 150,116 non-Japanese people, according to the Immigration Bureau of Japan.

The prefecture apostolic of Kyoto was established on June 17, 1937, from the four prefectures of Kyoto, Nara, Mie and Shiga, which belonged to the diocese of Osaka. It was entrusted to the Maryknoll Fathers.

With the resignation of Bishop Furuya in 1976, Father Ken'ichi Tanaka was appointed bishop of Kyoto and was consecrated on Sept. 23, 1976.

Bishop Tanaka resigned due to health reasons on March 3, 1997, and Father Yoshinao Otsuka was ordained bishop of Kyoto on May 25, 1997.

Throughout Japan, the literacy rate is 99 percent, according to the Central Intelligence Agency, US, 2010. The paradoxes of Christmas in Japan
22 Dec 2020 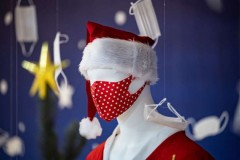