In the diocesan territory, the population is 7,557,000 at end of 2016. Most residents are ethnic Japanese. There are also 90,778 non-Japanese people, according to the Immigration Bureau of Japan.

The territory also has many languages and dialects.

The vicariate apostolic of Hiroshima was established on May 4, 1923, when the five prefectures of the Chugoku region (Okayama, Hiroshima, Yamaguchi, Shimane, and Tottori) were separated from the diocese of Osaka and entrusted to German Jesuits. Archbishop Heinrich Doering, S.J., was appointed the first ordinary and took up his residence as vicar apostolic in Okayama.

On June 30, 1959, the vicariate apostolic of Hiroshima was raised to the status of a diocese, and Monsignor Tokisuke Noda was nominated as the first bishop but excused himself due to illness. Father Yoshimatsu Noguchi was appointed in his place and on May 8, 1960, was consecrated and took office as bishop of Hiroshima.

Upon the resignation of Bishop Noguchi in 1985, Father Atsumi Misue was appointed bishop on March 29, 1985, and ordained on June 16 of the same year. Upon the resignation of Bishop Misue, Father Manyo Maeda was appointed bishop of Hiroshima on May 13, 2011. On Sept. 23 of the same year he was consecrated and took office as the current bishop of Hiroshima.

Airplanes, railways, ships and buses are modes of transportation in the diocesan territory.

Throughout Japan, literacy is 99 percent, according to the Central Intelligence Agency, USA, in 2010. 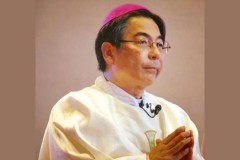