Catholicism arrived in the area in 1830, when Paulus Tsen On Njie, a Chinese physician, came and lived in Sungai Selan, Bangka, where he, besides engaging in medical practices, also shared his faith with those who visited him. Tsen was born in China and arrived with other Chinese migrant workers in the first half of the 19th century to work in tin mines on the island. Tsen was baptized in Penang, Malaysia.

In Bangka, Tsen built a worship place adjacent to his house complete with altar, statues, prayer books, rosaries, and other religious items which he brought from Singapore, and Penang. In 1849, learning of the presence of a small Catholic community in Bangka, then Coadjutor Bishop Petrus Maria Vrancken of Batavia apostolic vicariate sent Father Adamus Carolus Claessens to Bangka in July and August 1849. In Bangka, Father Claessens baptized 60 catechumens who had been prepared by Tsen, some for 10 to 12 years, but most of them from six months to a year.

Father Claessens visited the Catholics again in 1851, and from 1853 to 1868 Father Langenhoff became the first priest to reside in Sungai Selan. Tsen continued to live here to serve the Catholics in Bangka.

The initiative of Catholic lay people in introducing Catholicism, and establishing and maintaining Catholic communities in Bangka and the Riau islands without depending too much on priests, showed Pangkalpinang diocese as a “Church of the Laity.”

As in the early years of Catholicism in Bangka when most of the Catholics were Chinese migrants, in recent years the diocese has seen a rapid increase in the number of Catholics on Batam island, now an industrial area, thanks to the influx of migrant workers from various provinces of the country. The Catholic migrants form communities which are ethnically diverse. 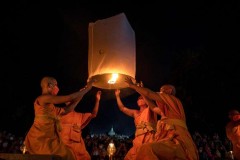