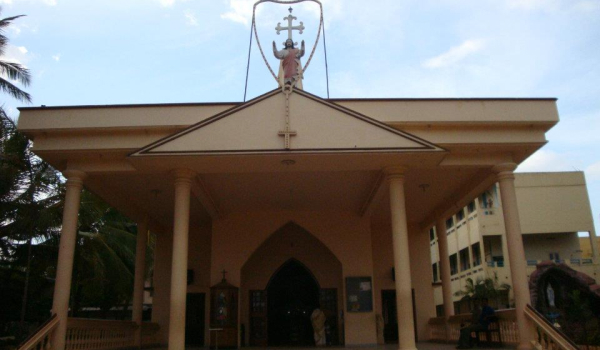 The diocesan territory stretches over 28,490 square kilometers and covers the civil districts of Coimbatore, Erode, Karur and Tirupur in the state of Tamil Nadu. Ramanathapuram is the biggest city in the diocese with more than 1 million people. Erode and Tirupur are other important towns in the diocese.

In Ramanathapuram diocese, the population was 61,978. Tamilians and Malayalees form the majority groups in the diocese.

Tamil, Malayalam, English, Kannada and Telegu are the languages spoken in the territory.

The bifurcation of the diocese of Trichur and the erection the diocese of Palaghat were on June 20, 1974. The Holy See erected a new eparchy of Ramanathapuram for the Syro-Malabar Catholics in the civil districts of Coimbatore, Erode, Karur and Tirupur in Tamil Nadu on Jan. 18, 2010.

The faithful in this area are the migrants from Kerala. Coimbatore is well known for its textiles and is an industrial area. It is the second biggest city of Tamil Nadu.

There are three forane districts in the eparchy --  Ramanathapuram, Gandhipuram and Erode.

Ramanathapuram is the oldest Syro-Malabar Catholic center at Coimbatore and is the biggest parish.

Coimbatore city is administered by a corporation headed by an elected mayor and council. The towns are managed by municipalities. The villages and small towns are administered by elected local bodies called panchayats.

The region is well connected by railways and roads. Coimbatore has its own airport.

The per capita income in the diocesan territory is Rs 23,515 ($528) as of April 2008. Textiles, farming, automobile-manufacturing and engineering are the major industries in the diocese. Cash crops such as cashew nuts, coffee, tea and spices are widely produced in the diocesan area.

How to reach Ramanathapuram Diocese?