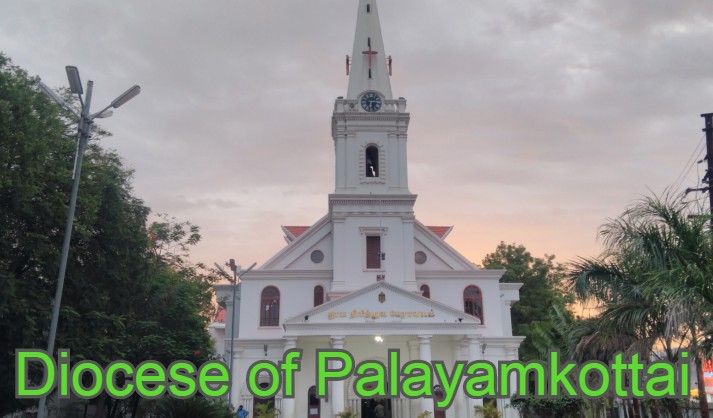 The diocesan territory had a population of 3,233,466 as of 2016-end.. Most residents are ethnic Tamils, Telegus and Malayalees.

English, Malayalam, Tamil and Telugu are the languages used.

Before the erection of the diocese of Palayamkottai, this area was evangelized by the Society of Jesus of Madurai Jesuit Province. The history of Christianity here begins from the time of St. Francis Xavier in 1542. The Madurai mission then took care of the spiritual needs of Catholics. Some of the renowned Jesuit missionaries like St. John de Britto (1686-1688), martyred in Oriyur which is now in the diocese of Sivagangai, and Father Constantine Beschi who spent part of his missionary life in this area helped strengthen Christians here. From the beginning of the 20th century, diocesan priests from the diocese of Trichirapalli cared for the spiritual needs of Catholics.

Bishop S. Iruthayaraj pastored the diocese for 26 years and contributed to its growth in the various fields of spiritual, pastoral, educational, social, developmental and ecumenical activities. He voluntarily retired from his episcopal ministry in July, 1999. On Nov. 9, 2000, Rome announced Father Jude Paulraj, who was then rector of Christ Hall Major Seminary, Madurai, as the second bishop of Palayamkottai. He was consecrated by Archbishop Arockiasamy of Madurai at Palayamkottai on Dec. 8, 2000.

Towns are governed by municipalities, whereas villages and small towns are administered by local bodies called panchayats. The members of the local bodies are elected by adult suffrage.

The diocesan area is well connected in terms of transport infrastructure by roads and railway. The nearest airport is in Madurai.

The diocesan territory covers 6,103 square kilometers and includes the entire civil district of Tirunelveli and one taluk from neighboring Tuticorin district. Tirunelveli is the biggest town in the diocese.

The per capita income in the diocesan territory was Rs 19,092 ($416) as of September 2006. Major industries are farming, fireworks, matchsticks and tobacco.