Ethnic groups in the territory include Maharahstrians, Gujarathis, Malayalees, Marwaris, Tamils and Telugus. Most of the people speak Hindi, Malwi, Bhili and Bhilali but there are a considerable number of people who speak English, Marathi and Gujarathi.

On March 3, 1931, the mission territory of Indore was formed by extracting some territories from the diocese of Ajmer, Allahabad and Nagpur and was officially assigned to the Society of the Divine Word. The territory then covered 110,000 square kilometers.

On March 11, 1935, the Indore mission was elevated to a prefecture apostolic and Msgr. Peter Janser was appointed the first prefect apostolic. Under his leadership, the mission made considerable progress. The diocese of Indore was erected on May 15, 1952. Msgr. Francis Simons, SVD, was appointed as its first bishop. During his tenure, he established many new stations. With his foresight he purchased land in many places.

The districts of Ujjain, Shajapur and Raigarh were separated from the diocese of Indore and the exarchate (later diocese) of Ujjain was established in 1968.

The two civil districts of Khandwa and Khargone were separated from Indore diocese and the diocese of Khandwa was erected on Feb. 3, 1977.

The literacy rate is 83 percent. 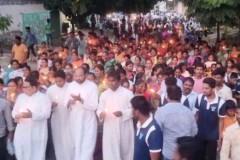