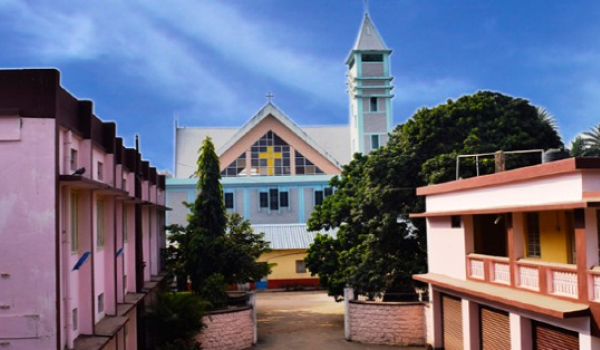 In a land area of 6754 square kilometers, the diocesan territory covers Gumla civil district and part of Simdega district.

Hindi, Sadri, Kurukh (Oraon), Kharia and Mundari are the languages spoken in the diocesan territory.

Two regions of the present Gumla diocese, namely Nagpur and Barway, were among the most promising fields of apostolate when, in the last decade of the 19th century, the missionaries of Belgian Jesuit province evangelized what was then called "The Mission of Bengal". Fathers Louis Cardon and Constant Lievens were the most outstanding among them. In 1922, those regions became respectively the deaneries of Konbir-Noatoli and Tongo (Barway) of the Ranchi archdiocese. But it took more than a hundred years after the first period of evangelization when together with other areas, they were united in the present diocese of Gumla, which was erected on May 28, 1993 by Pope John Paul II . Gumla diocese is part of the Ranchi ecclesiastical province. Bishop Michael Minj, S.J., was the first bishop of Gumla.

There are three state assembly seats in the diocesan area: Gumla, Bishunpur and Sisai. Some portion of it falls under Simdega assembly constituency.

Road transport is prevalent in the area of the diocese.

The per capita income in the diocesan territory is Rs. 15622 ($343) as of February 2011. People depend for their livelihood only on agriculture, especially on paddy crop.

Mobile phones are spreading fast. No TV broadcasting station and radio stations in the territory.

Literacy rate in the diocesan territory is 65.75 percent.

Music, song, dance and drama in the region are all based on tribal culture. All the tribal communities have always been linked with nature. In the diocese, Oraons form the major tribal group.

How to reach Gumla Diocese?