Ahmedabad, a mega city, is the commercial capital of Gujarat, although the political capital has been shifted some 32 kilometers away to Gandhinagar. Ahmedabad diocese is the oldest diocese in the state. The earliest sign of Christianity is a church dating back to 1842. But only in 1893 did the archdiocese of Bombay sent a missionary to formally establish a mission in the state, where priests from Germany, Switzerland and Spain served.

Gujarati is the main spoken language. But a sizeable number of people speak English, Konkani, Hindi, Malayalam and Tamil in Ahmedabad.

Climate is hot with temperatures reaching 46 degrees Celsius during summer. Winters are generally not cold.

Ahmedabad diocese covers 14,791 square kilometers comprising the districts of Ahmedabad, Anand and Kheda. It was created from the territory of Bombay archdiocese on May 5, 1949. At that time, its territory also included what are now Rajkot diocese (Syro-Malabar) and Gandhinagar archdiocese, which were separated from it in 1977 and 2002, respectively. 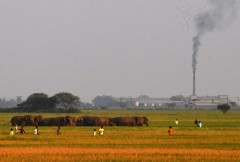