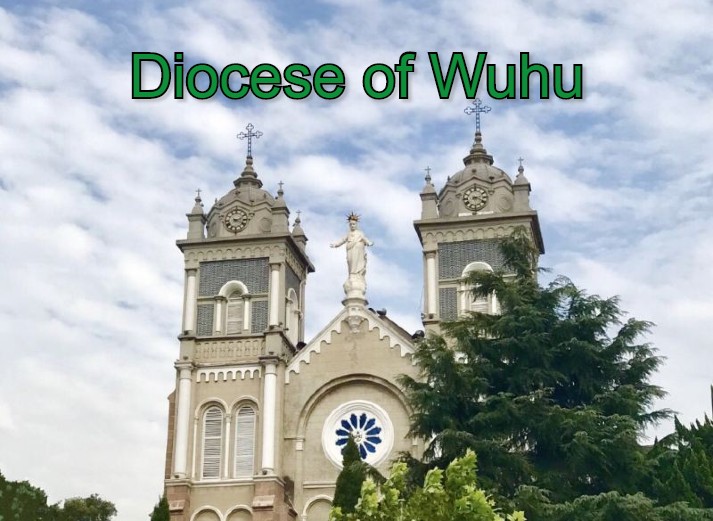 The Roman Catholic Diocese of Wuhu is a diocese located in the city of Wuhu in the Ecclesiastical province of Anqing in China.

Wuhu is a prefecture-level city in southeastern Anhui province, China. Sitting on the southeast bank of the Yangtze River, Wuhu borders Xuancheng to the southeast, Chizhou and Tongling to the southwest, Hefei city to the northwest, Ma'anshan city to the northeast, Jiangsu Province to the east, and is approximately 90 km (56 mi) southwest of Nanjing. As of 2017, the city had a population of approximately 3,696,000 officially registered inhabitants.

By the end of 2017, the total population was estimated to be 3,842,100 of whom 1,665,000 live in the 4 urban districts and the others live in the counties. The city has over 47 ethnic minorities present — the largest being the Muslim population. There are other ethnic minorities with over 500 inhabitants in the city: Yi, Tujia, Miao, Zhuang, and Manchu.

Jiang-Huai Mandarin, a branch of Mandarin Chinese, was widely spoken in urban area, while some people in the counties spoke Wu Chinese. Putonghua, or Standard Mandarin was commonly used in this area.

There is no civilian airport in Wuhu but there is a military airport used by the People's Liberation Army Air Force. Wuhu has one Yangtze River crossing—the Wuhu Yangtze River Bridge, opened in 2000, carries the G5011 Wuhu–Hefei Expressway and Huainan Railway.

Wuhu is served by the Anhui–Jiangxi, Nanjing–Tongling and Huainan Railways. It only takes 2.5 hours from Shanghai to Wuhu by high-speed train. Wuhu Rail Transit Line 1 and Line 2 are under construction and scheduled to be operational by the end of 2019.

Wuhu Economic & Technological Development Area in the north of the city launched in 1993 is one of the first state-level economic and technological development area in Anhui province. It has the only export processing zone in the province.  Chery Automobile and Anhui Conch Cement Company are headquartered in this development area.

Wuhu is the fifth largest port alongside Yangtze River. Yuxikou Pier is the largest inland river coal harbor in China.