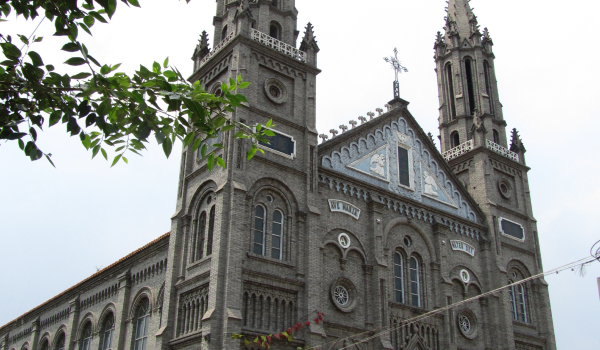 In a land area of approximately 10,700 square kilometers, the diocesan territory covers the prefecture-level city of Shuozhou. Its administrative area includes 2 urban districts (Shuocheng and Pinglu) and 4 counties (Shanyin, Ying, Youyu and Huairen).

Shuozhou has a population of 1.5 million.

Mandarin Chinese, Shanxi and Shuozhou dialects are in use in the diocesan territory.

Catholicism was introduced to Shuozhou area in the 18th century. The first church was built in 1725. After Qing Dynasty's ban on Catholicism was revoked after the Opium Wars, the Church community in Shuozhou achieved rapid development in the second half of 19th century. In 1884, there were about 600 baptized Catholics and 300 catechumens.

In 1926, the Holy See erected the Prefecture Apostolic of Shuozhou and entrusted it to German Franciscan missioners. It covered 15 counties with nearly 4,500 Catholics. In 1932, it was elevated to Vicariate Apostolic with Father Edgar Anton H?ring ordained as its first bishop.

Shuozhou was promoted to a diocese when the Chinese Church Hierarchy was established in 1946. However, in the same year, Communists took rule of Shuozhou and expelled foreign missioners. In 1949, the Bishop's House was confiscated to open a school. Some Chinese priests were imprisoned or sentenced to reform-through-labor, while the others joined the government-sanctioned Catholic Patriotic Association.

Priests who survived the Cultural Revolution gradually regained freedom and returned to the diocese after 1978. Father Bonaventure Luo Juan became the second bishop of Shuozhou in 1990. He ordained Father Paul Ma Cunguo as his coadjutor in 2004. Bishop Ma succeeded Bishop Luo as the third bishop of Shuozhou upon his death in 2007.

The city is easily accessible by highway, rail and air. The Datong-Yuncheng Highway, which is linked with the Beijing-Datong Highway, goes through the city. The Shuozhou-Huanghua Railway starts from the city, linking the city with other major cities in Shanxi Province and Hebei Province. Renhuai Airport, 90 kilometers from downtown Shuozhou, and Pingshuo Airport provide regular flights to Beijing, Shanghai, Guangzhou, Xi'an and other cities.

With a typical continental monsoon climate, the city has distinct four seasons and an average temperature of 6.4 degrees Celsius.

Shuozhou is a centre of industry, and its notable industries are primarily mining of coal and other ores such as iron, bauxite, mica, manganese, and graphite. Other economic sectors include agriculture, chemical industry, ceramics, and fishing.

Shuozhou is a centre of industry, and its notable industries are primarily mining of coal and other ores such as iron, bauxite, mica, manganese, and graphite. Other economic sectors include agriculture, chemical industry, ceramics, and fishing.

Shuozhou's economy is relatively small. In 2010, the GDP of the city grew 13.8 percent from a year earlier to RMB 67.01 billion, being the third smallest economy in Shanxi province. The value-added output from primary industry, secondary industry and tertiary industry reached RMB 4.05 billion, RMB 37.9 billion and RMB 25.06 billion, comprising 6 percent, 56.6 percent and 37.4 percent of the city's GDP, respectively.

Shuozhou is seated in the northern part of Shanxi province. It is 200 kilometers north of Taiyuan, the capital of Shanxi, 129 kilometers from Datong and 502 kilometers from Beijing, the capital city of China. Inner Mongolia Plateau is adjacent to the city to the north. Shuozhou covers an area of 10,700 square kilometers, of which 60 percent is mountainous and hilly area.

Shuozhou's history stretches back to about 28,000 years ago, when human beings began to settle in the territory. During the Warring States Period (476 -221 BC), Shuozhou was under the control of the Zhao Kingdom. After the Qin Dynasty (221-206BC) when China was unified, the central government began to set up counties and prefectures to administrate this area. Due to its important geographic location, the region always served as a battlefield in ancient times. Shuozhou was promoted to be a prefecture-level city in 1989.

How to reach Shuoxian Diocese?