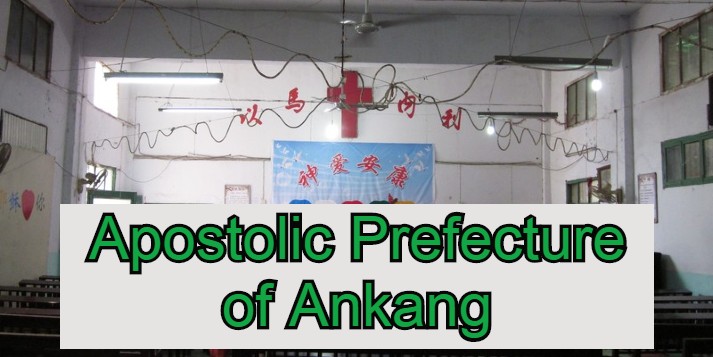 According to the Pontifical Yearbook 2006, the diocesan territory covered an area of 25,000 sq. kilometers in 1950.

Ankang was split off from Hanzhong Vicariate and became Hinganfu Apostolic Prefecture in 1928. It remained under the administration of the Italian Conventual Franciscans until all foreign missioners were expelled from China in the 1950s.

Before communist rule began in 1949, seminarians from Ankang diocesan area studied at either the major seminary in Hanzhong or the one in Kaifeng, which was run by the Pontifical Institute for Foreign Missions.

Ankang has never had a big Catholic community. The territory that the Ankang Diocese covers was estimated in 1950 to have 3,982 Catholics and 19 churches.

The diocese now has six priests in their 30s and 40s serving 4,200 Catholics in the smallest diocese in Shaanxi province. Two other priests are on study leave and teach in the Xi'an minor seminary. The Catholic population doubled after Bishop Ye was ordained as Ankang's first Chinese bishop on December 10, 2000. Their number is now almost the same as in the 1950s, when political turmoil in the past decades caused Catholics to disperse.

Ankang is a financially backward diocese in Shaanxi. Every priest has a monthly stipend of 100 yuan (US$12), but nothing for medical or evangelization purposes. Catholics in the diocese are mainly farmers, workers and businessmen, and the others are unemployed and retirees. Many families barely earn enough to feed themselves and can offer little to the Church.

Ankang's new diocesan complex building was completed and was opened in June 2009, with a floor area of 1,832 sq.meter.

The permanent resident population of Ankang was three million at the end of 2007 — an increase of 2,400 more than the previous year — as per the government reports. There are 23 ethnic groups who live together, such as Hui, Man, Mongolian, Miao, Bai, Dong, Zhuang and so on. The Han nationality accounts for 99.1 percent of the total population of the city and the other minority groups account for 0.9 percent.

There is an airport and since 2001, a new railway track from Ankang and Xi'an, the province capital.

A highway from Ankang to Xi'an was opened in May 2009.

Ankang is located in the region of continental subtropical monsoon climate. It has four distinctive seasons, abundant rain, long frost-free periods and obvious vertical regional climate. The annual average temperature is around 12ºC in Ningshan and Zhenping County and about 15ºC in other counties. The total number of annual sunshine hours is between 1,495.6 and 1,836.2, and the annual rainfall, between 750 and 1,100 millimeters.

The frost-free period is as long as 210-270 days, which lasts on an average of more than eight months. The main features of the climate are: a cold winter with a little rain and snow; a rainy summer with drought; a warm and dry spring; a cool and wet fall with much constant rain. The main severe weather is summer drought, rainstorm and constant rain.

The highest part of the city is situated towards the east side of Qinling Mountains, with an altitude of 2,964.6 meters and the lowest part, which is located at the exit of Hanjiang River in Baihe County, is 170 meters above sea level.

Ankang has unique geographic advantages, being situated at the geometric centre of three economic districts — Xi'an, Wuhan, and Chongqing. It adjoins Hubei Province in the east, Sichuan Province and Chongqing Municipality in the south. In Shaanxi Province, Ankang borders the capital city of Xi'an and Shangluo City in the north and Hanzhong City in the west.