The area known today as Pet Yiet Chee has been a stronghold of Catholic presence in Battambang. Around 300 Catholics left Pursat and Kompong Svay in Cambodia on Jan. 5, 1790, to settle there.

During the 18th century, the missionaries helped better the lives of the people in Battambang, thereby freeing slaves, buying rice fields and assisting the poor and the needy in times of trouble.

Two nuns belonging to the Providence of Portieux began a crèche, a hospital and an orphanage in Battambang in 1905.

The apostolic prefecture of Battambang was established on Sept. 26, 1968, and was entrusted to Monsignor Paul Tep Im Sotha.

The Khmer Rouge, the communist party, took over capital Phnom Penh in May 1975. The genocide that followed resulted in the death of approximately 2 million people.

The victims included Monsignor Sotha and Father Jean Badre, a French Benedictine, who were killed in May 1975 at Bat Trang in Mongkol Borei district of Banteay Mean Chey province in northwest Cambodia, near the Thailand border.

The refugees, who returned in the early 1990s, helped revive the Catholic communities in northwest Cambodia through prayer and worship. They had received intense formation by MEP missionaries during their exile in Thailand. The Church brought back its property which earlier housed the hospital of the Providence sisters.

The Catholic communities were granted permission to worship freely and Caritas Cambodia was re-established after 15 years. The Vatican re-appointed Bishop Yves Ramousse as apostolic vicar of Phnom Penh on July 25, 1992. Bishop Ramousse became the apostolic administrator on Dec 21, the same year, up until 2000, when Jesuit Father Enrique Figaredo was appointed the apostolic prefect of Battambang.

Father Figuredo has been working with the people of Cambodia since 1985. How to reach Battambang Apostolic Prefecture? Cambodia marks a century of Christianity
PM urges religious harmony while Theary Seng, a prominent Christian who worked on Khmer... 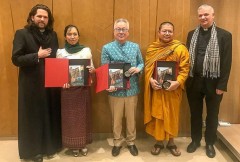 Cambodian Buddhist-Christian delegation meets pope
The European tour was meant to 'better understand our differences, be able to live better together... Cambodia tells US not to interfere over Thach Setha arrest
Phnom Penh irritated by calls for stronger democracy ahead of... Ukrainian deminers complete training in Cambodia
New skills will boost efforts to combat mining scourge amid Russia’s invasion of its...