In 2016, the total population was around 17,784,960. In addition to Bangla, which is widely spoken, tribal communities in the diocesan territory speak their own languages.

The Spanish Carmelite missionaries first evangelized the diocese in the 17th century. In the mid-19th century, the area was part of the Krishnagar Mission (now the Diocese of Krishnagar in West Bengal, India). The PIME missionaries came to the area in 1855 and have been there ever since.

The Diocese of Dinajpur covered all of North Bengal when it was erected in 1927 and was entrusted to the PIME missionaries and the bishop was Santino Taveggia PIME, who was earlier the Bishop of Krishnagar. Their main collaborators were the Sisters of Charity (Maria Bambina Sisters). In 1952, Bishop Joseph Obert PIME founded the diocesan Catechist Sisters of the Immaculate Heart of Mary, Queen of Angels (CIC). The Missionary Sisters of the Immaculate (MSI, PIME) arrived in the diocese in 1953.

In 1952, after the partition of the subcontinent, the territory comprising the current Indian dioceses of Dumka, Raiganj and part of Jalpaiguri was detached from the Diocese of Dinajpur. In January 1976, Pabna District, along with St. Rita's Parish in Mathurapur, were transferred from the jurisdiction of the Archdiocese of Dhaka to the diocese of Dinajpu to cover the whole of Rajshahi division, across the rivers the Jamuna and the Ganges.

In May 1990, the southern areas were detached to form the new Diocese of Rajshahi.

There is no separate political structure in the diocesan territory. Citizens elect representatives for parliamentary seats. The minority communities have no undue pressure to participate in politics.

Buses, trains and private vehicles are the main modes of transport in Dinajpur . Domestic flights reach only up to Saidpur, about 130 kilometers to the south. Roads connect district towns and rural areas of the diocese.

The annual per capita income of Bangladesh was US$599 as of June 2008, according to the Bangladesh Bureau of Statistics. Agriculture is main source of livelihood, with the main products being rice, wheat and lychee. Rice varieties from this area are famous.

The literacy rate is 26 percent, according to the local government office.

How to reach Dinajpur Diocese? 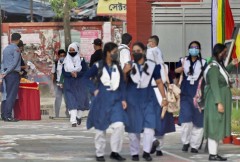