Barisal was a semi-independent area during the Mughal period due to the intense fighting between the Mughals and the Hindu chiefs. In the course of time, it fell under the Bengal Nawabs and then to the colonial British India. It was later passed to East Pakistan during the Partition and then finally to Bangladesh.

Barisal has one of the biggest river ports in the area. It is a city with nearly 0.38 million people and a divisional headquarters, medical college, cadet college, pharmaceutical and textile industries, and the Bangladesh Inland Water Transport Authority's head office.

Barisal is a fast-growing city. The country's first short take-off and landing airport has been completed in Barisal and a private airlines, Air Bengal, has begun regular service between Dhaka Tejgaon Airport and Barisal. The city is sometimes called the "Venice of the East" or the "Venice of Bengal".

Barisal has a tropical wet and dry climate.

Barisal is a rice-producing center of Bangladesh. Balam (a kind of basmati rice) is the most popular rice in Barisal. It is also famous for betel leaf, a typical South Asian chewing leaf. As Barisal is surrounded by river, fish is available in plenty there. As the Bengali saying goes, Dhan, nadi, khal ai tine Barisal, which translates to "paddy, river and canal are the three things that make Barisal.”

Coconut is a common fruit as the city is located near the coast. Barisal is also known for its hog plum.

Since 2015-end, the Catholic minority has its own diocese in Barisal.

How to reach Barishal Diocese? 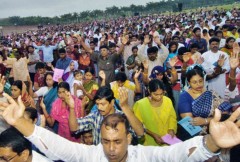 Bangladesh's minorities march for rights, protection
Communities face discrimination and oppression amid a lack of laws and mechanisms for their...