Bishop Sebastian Vadakel, MST was born on Oct. 7, 1952 at Vilakumadam in the eparchy of Palai, Kerala. He joined Deepti College, the minor seminary of the Missionary Society of St. Thomas the Apostle (MSTA). He had his major seminary formation at St. Joseph's Seminary, Mangalore. He was ordained priest on April 19, 1979.

His first appointment was as professor at Deepti College, Melampara and later served as its rector. In 1982, he was sent to Rome for higher studies where he took his doctorate in canon law. On his return he was sent to the Ujjain Mission where he served as assistant parish priest in Khadi and Shajapur and parish priest at the Cathedral, Ujjain. During this time he took B.A. and M.A. in Hindi literature. He also served as visiting professor of a number of Major Seminaries and formation centers. On May 18, 1993, he was elected the director general of MSTA which office he held until May 18, 1998.

He was nominated bishop of Ujjain on June 5, 1998, to succeed Mar John Perumattam and was ordained bishop on Sept. 8, 1998, at St. Mary's Cathedral, Ujjain. In 2008, he was appointed as the chairman of the Commission for Evangelization and Pastoral Care of the Migrants of the Major Archiepiscopal Syro-Malabar Church. He is also a member of the Council of the Bishop of Madhya Pradesh and is the Chairman of the Commission for Ecumenism & Inter Religious Dialogue in Madhya Pradesh. 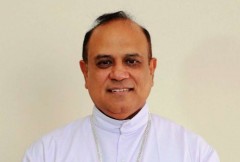