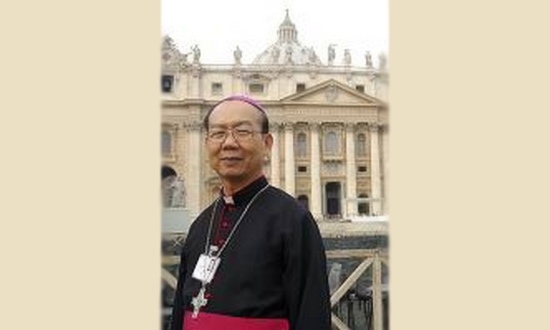 Bishop Joseph Prathan Sridarunsil of Surat Thani, a Salesian, was born Feb. 9, 1946, in Wat Phleng, Ratchaburi. His family later moved to Nakhon Pathom, 50 kilometers west of Bangkok. In 1964 he entered the novitiate of the Salesians of Don Bosco (SDB) and on Oct. 2, 1965, he took his first vows. He studied philosophy and theology in Hong Kong and Israel before Pope Paul VI ordained him a Salesian priest at the Vatican on June 29, 1975. He has a degree in spirituality from his congregation's Pontifical University Salesianum in Rome. He had served as provincial of the Salesians in Thailand from 1998-2001 and was elected as provincial again in Feb. 14, 2004. He was appointed Bishop of Surat Thani by the late Pope John Paul II on Oct. 9, 2004. On Nov. 28, 2004, he was ordained bishop.
Less than a month after his episcopal ordination, on Dec. 26, 2004, the tsunami, a result of a massive earthquake off Indonesia's Aceh coast, hit Thailand's southwestern coast. Six of Surat Thani diocese's 15 southern provinces were affected by the tsunami. The disaster killed 5,400 people and about 3,000 were listed as missing, but presumed dead in Thailand.