The Holy Father appointed Father Vitus Rubianto Solichin, S.X, as bishop of Padang diocese on July 3, 2021.
Before the appointment, Bishop Solichin was a lecturer in the major seminary and rector of the School of Philosophy, Jakarta.
Bishop Solichin was born on Nov. 15, 1968, in Semarang, Java Island.

After priestly ordination he obtained a licentiate in sacred Scripture at the Pontifical Biblical Institute in Rome (1997-2001), after which he served as professor of sacred Scripture at Driyarkara High School of Philosophy and Major Seminary in Bandung (2001-2007).
Since 2013 he has served as professor and vice-chairman for Academic Affairs at Driyarkara in Jakarta, and member of the Xaverian Formation Team and the Xaverian Provincial Council of Indonesia. 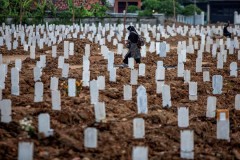