He succeeded Bishop Stanley Roman, whose resignation Pope Francis accepted on reaching the age of retirement.

Bishop Mullassery was born on Jan. 15, 1960, at Kaithakody in the diocese of Quilon. Bishop Mullassery did his studies at St. Raphael’s Minor Seminary, Quilon, and at the Trinity Lyceum and at St. Joseph’s Pontifical Seminary, Aluva.

He was ordained priest on Dec. 22, 1984, for the diocese of Quilon. Bishop Mullassery obtained a doctorate in canon law from Pontifical Urban University, Rome, and a post-doctorate diploma from Gregorian University on the same subject.

He was also joint director of catechesis and Bible apostolate, chancellor of the diocesan curia, episcopal vicar and pro-vicar general, and episcopal vicar for pastoral ministries.

In 2006, he was granted the title of Chaplain of His Holiness.

He also served as judicial vicar and the vicar general of the diocese.

How to reach Quilon Diocese? 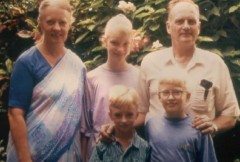