Bishop Jesse Eugenio Mercado was born on June 6, 1951 in Santa Cruz, Manila. He was ordained a priest on March 19, 1977, and appointed Auxiliary Bishop of the Archdiocese of Manila by Pope John Paul II on Feb. 25, 1997. His episcopal ordination was on March 31, 1997. On Dec. 7, 2002 the late pope created the Diocese of Parañaque from the southernmost parishes of Manila archdiocese and appointed him as the first Bishop of Parañaque. He was installed on Jan. 28, 2003. Before his appointment as auxiliary bishop, he first served as rector of the Pontificio Collegio Filipino in Rome (1994-1997). He was secretary of the Episcopal Commission on Seminaries while serving as rector of the Holy Apostles Senior Seminary in Makati City (1988-1994). He was professor and assistant spiritual director (1981-1988) of the pre-college department of San Carlos Seminary in Makati City where he earlier served as director (1979-1981) and spiritual director of San Pablo Regional Seminary in Baguio City (1977-1979). His earliest assignment was as parochial vicar of San Isidro Parish in Pasay City (1977). 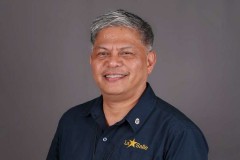