Bishop Florencio was born in Capoocan, Philippines in 1966 and was ordained a priest in 1990. He received a licentiate in theology from the University of Santo Tomas in Manila, Philippines and a doctorate in sacred theology from the Pontifical University of the Sacred Heart, Rome. He has served as parish vicar and spiritual director of the Sacred Heart Seminary in Palo, and parish priest. He is currently rector of the Saint John School of Theology, Palo, and vice-chancellor of the same archdiocese. 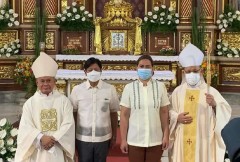