Bishop Sofronio Aguirre Bancud, SSS, DD, was born on Dec. 8, 1948 in Atulayan Norte, Tuguegarao City in Cagayan, to parents Antonio Bancud and Soledad Aguirre. He finished his elementary education at St. Paul University and his high school at Cagayan State University both located in Tuguegarao City. In 1969 he earned his degree in Bachelor of Commerce at the University of Sto. Tomas (UST) in Manila. Two years later, he entered the Congregation of the Most Blessed Sacrament and finally on Dec. 9, 1972 he professed his vows to the religious life. He obtained his licentiate degree in Sacred Theology at St. Francis Xavier Regional Seminary in Davao City in 1977. He was ordained a priest on May 2 of the same year. Further studies and formation had him sent to the following places: Summer Institute of Spirituality, Notre Dame de Vie, Quezon City (1978); Institute for Formative Spirituality for Formators, Emmaus Center, Marikina City (1983-1985); Sabbatical Program, Hesburgh Center for Continuing Formation in Ministry, Chicago, Illinois, USA (1999).

He was elected titular bishop of Bida and Auxiliary Bishop of Cabanatuan on May 24, 2001 and ordained Bishop on Aug. 2, 2001 at Sta. Cruz Church in Manila by then Apostolic Nuncio to the Philippines, Archbishop Antonio Franco, DD. He was appointed Bishop of Cabanatuan on Nov. 6, 2004; and was installed in solemn ceremonies as the 7th ordinary and 5th residential Bishop of Cabanatuan at St. Nicholas of Tolentine Cathedral, Cabanatuan City on Jan. 25, 2005 - six months after the death of his predecessor, the late Bishop Sofio G. Balce Jr., DD, STD. 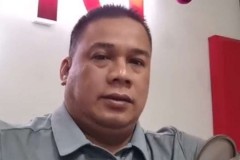