John Du was Born on October 18, 1954 He was appointed Bishop of Timici. He was ordained priest of Cebu, Philippines on June 1, 1979 after obtaining degrees in philosophy and theology from the San Carlos Seminary College in Cebu and the Divine Word Seminary in Tagaytay City.[2] In 1997, Pope John Paul II appointed him Auxiliary Bishop of Cebu. He was named Bishop of Dumaguete on April 21, 2001. In 2012 he is the CBCP treasurer and chair of the CBCP Pension Plan. The archdiocese of Palo had 1.2 million Catholics as of 2004 and its suffragan dioceses include Borongan, Calbayog, Catarman and Naval.On February 25, 2012, Pope Benedict XVI has elevated Dumaguete Bishop John Du to Archbishop of Palo replacing the vacant see of Archbishop Jose S. Palma 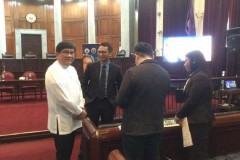 Philippine Supreme Court under fire for 'legalizing divorce'
13 May 2021