Archbishop George Antonysamy was born on Feb. 15, 1952 in Trichy, Tamil Nadu. He did his early school education in his native place and then joined St. Augustine's Minor Seminary.

He completed theology studies from Urban University, Rome. He was ordained priest on Nov. 19, 1980 in Trichy.

After one year as assistant parish priest at the Holy Redeemer's Minor Basilica, Trichy, he was sent to Rome for higher studies.

In 2002, Pope John Paul II appointed him as the charge d’affaires of the Vatican embassy in Jordan.

On August 4, 2005, Monsignor George Antonysamy was elected as titular archbishop of Sulci in Sardinia, Italy, by Pope Benedict XVI and had his episcopal ordination on Sept. 21, 2005 in Trichy.

He was simultaneously appointed as the apostolic nuncio to Gambia, Liberia, Guinea and Sierra Leone, an office which he holds until now.

He succeeds Archbishop Malayappan Chinnappa, who has retired. 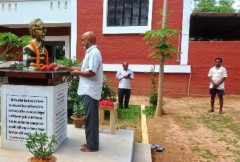 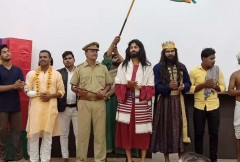