Father Enrique Figaredo Alvargonzález, S.J. is known as the “bishop of the wheelchairs” for his humanitarian works. He was born on Sept. 21, 1959, in Gijón, Spain.

Before joining the Jesuits on Oct. 15, 1979, he attended the Jesuit School in Gijon, and graduated in 1976. He holds degrees in economics, theology and philosophy.

He served as a volunteer for the Jesuit Refugee Service (JRS) in 1985, during his university studies, and was later sent to a Cambodian refugee camp in Thailand. He was ordained a priest in 1992.

He was appointed as the prefect of Battambang on April 1, 2000. 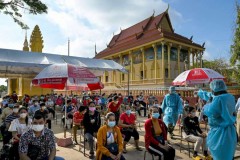 Cambodia ends curfew amid easing of pandemic restrictions
22 May 2021